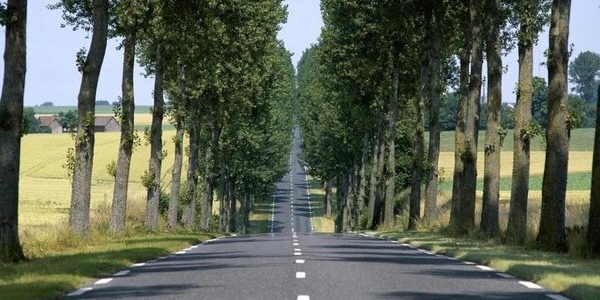 It’s Tuesday morning and we are walking to school down a neighbourhood street, the kind that invites speeding.

The street is straight and as wide as a French highway. Every street corner boasts ample sight lines, right into another beautiful, wide, straight, neighbourhood street. These neighbourhood streets are so close to two elementary schools that the children who live here do not qualify for bussing. They are expected to walk or bike. Yet the car — or if you live in an affluent suburb like Stittsville, the luxury SUV and the contractor pick-up — is King. The roads are designed for maximum visibility, which we have learned, invites maximum speed.

On our walk to school, I am holding my 5 year-old’s hand on one side of the street. My daughter is walking on the opposite side  because she’s mad at me.

Before we left, her brother threw her school bag on the ground instead of giving it to her and she said: “I’m not picking it up” and started leaving. I said “So he throws your school bag on the ground and you leave it here with your lunch and your homework. Who are you punishing exactly?” Her brother was long gone. She lashed out at me “SHUT UP. I don’t care about you, I don’t care what you think. Just stop talking.” And my heart just broke because it was the third time before 8 am I had been told by someone to shut up and the second time I had been told that no one cared. And that was after being yelled at by another angry child who had been asked not to swing a toy at the walls, accusing me of not caring about anyone. Never in my life have I met someone who worked so hard for people she doesn’t care about.

“I’m doing 35!” she said as she sped off again through a stop sign. The stop signs are beautifully designed for maximum safety, with sight triangles the size of Texas. The visibility is so impeccable that you don’t even need to stop, you can see cars coming a mile away. A 5 year-old on his bike, maybe not. But he’s not the King of the road.

Who knows, maybe she was doing 35? Speed is hard to appreciate when the pick-up coming at you is so jacked that the front wheels are taller than your 5 year-old. You wouldn’t want to be stuck in traffic on the 417 with anything less than 10 inch of ground clearance. Everything looks too fast when it weights 2 tons and is coming at you, know what I mean? I don’t have a radar gun in my head, I only have a hunch that whatever the speed limit is, if you need to serve to avoid my child, it might be too high. Just a hunch. Just a mother’s heart that may be bruised but still skips a beat when you hurl a heavy-duty motor vehicle at the featherweight child she’s just been accused of not caring about.

My daughter crossed the street and came to see me. She said “Why was this lady yelling at you?” and I said it was because I had made a sign to slow down. “That lady looks like she might have a problem” my daughter answered.  And I said “Maybe. But how is that different from what you did this morning?”

“I’m everyone’s anger doormat. People are angry and they don’t like it, so they look for someone to wipe their anger off on. You just used me to clean the anger you felt towards your brother. This lady used me to clean up the anger she felt at God-knows-what. We wipe our anger on people and we leave satisfied, for a moment. But the anger doesn’t disappear. Now I have to deal with it. Now I have to deal with the pain of having been yelled at, of having been told no one cares about what I say, of having been accused of not caring.”

Now I have to deal with the fear that the next time this lady drives by my family she’ll speed up instead of slowing down, just to show me who this street really belongs to. Anger doesn’t dissipate. It doesn’t evaporate. It communicates like a disease. It sullies everything it touches until all of us are trying to wipe it off something else.

Seeing is not caring. We thought that better visibility would make our roads safer,  as if seeing the other was all that carefulness needed to take root. We expanded the sight lines, widened the triangles, until we realized that carelessness expands to fit the space it is given.

And so carelessness expands to fit the space it is given, anger communicates like a disease, and sight lines become blind spots.

HEEEEEELP! These alcove-thingies! What are we supposed to do with them??
One year at @landmarkcrossfit today. Best thing I didn’t know I needed. I go at 6am 5 times a week. Now if that’s not an endorsement I don’t know what is.
Damien helping grandpa win at 7up
My mom’s favorite child, and Clara.